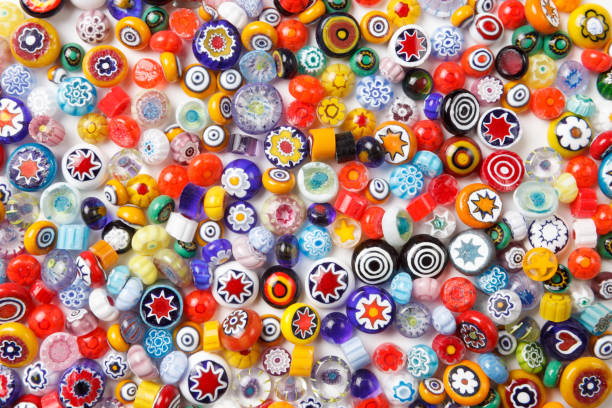 We present you a selection of artworks displaying the secrets of Murano’s art: Millefiori, also called Murrine. A hot glass technique that is certainly one of the most used in Murano glasswork when working in hot glass blowing. Exploring the secrets of this fine work, we conclude that one could hardly resist the temptation of the beautiful and whimsical flowers, demonstrating their striking colours.

The Murano glass pendants, rings, paperweights, collectible figurines, vases and other objects exhibited in museums around the world are a testimony of this perfect craftsmanship.

This technique introduced for the first time on Murano in the 16th century, which is still used today is a diverse way to create unique glass pendant and earrings designs, whether it be animals, flowers…etc, or details of nature. It can also be used to create superb figurines and collectible pieces.

The ancient Roman glassmakers were able to create multicolored and decorative pieces, mainly vases and other decorative items. During the Renaissance, when the Venetian glass makers began trying to imitate classical Roman glass, they came up with millefiori – literally “thousand flowers” in Italian.

For us Murano glassmakers, Millefiori is a sort of a perfection test, and it is also the starting point to many wonderful studies and projects which we can work on.

The craft of Millefiori or Murrine, is a very old technique used in glassmaking that produces elaborate work consisting of a multitude of small glass rods, bevels and canes that have been fused together and shaped into different designs. The name came from the Italian for “thousand flowers”. It was originally developed so that the glassblowers could continue to produce elaborate decorations with gold leaf after Emperor Constantine outlawed their use in 313 A.D.

Abstract patterns, variously colored and dominating the surface, could cover vases and other objects. By varying the thickness of different sheets of glass, the Murano glassblowers could obtain a rich sparkling effect of iridescent light. This technique allowed the creation of floats of sprays interspersed with different colors, like those still to be found on ancient Roman glassware like the Greenhouse at Herculaneum (79 AD).

The secrets of Murano’s art pieces and how they are made – To be able to better immerse your mind in the fascinating historical setting of different ancient cultures you may indulge into, it is important to know the proper background information on any of their priceless relics. That way, you will get a better idea on how said artifacts originated, who designed them and so much more.

The art of glassmaking developed in Rome between the first and third centuries AD. It is believed that this art was transmitted to the island of Murano by settlers from Italy around the year 1000. At that time there was a great interest in using glass in mosaics, which was previously used mainly for religious purposes. Thus began the development of techniques such as millefiori (thousand flowers)

The Roman technique called “Opus Alexandrinum”, meaning the “Egyptian work”, had the object created by dipping into molten glass a rod made of clear coloured glass. The first attempt to recreate this technique was done using just one rod, later on it evolved into using a number of rods combined together dipped at the end in red glass: on the resulting beads it was possible to figure out the multicolored patterns that would have been displayed on the older Roman pieces. This technique was considered too tedious for any real production and it was almost lost, until in mid-1500s some artists working on Murano were rediscovering it again.

Interior design: is Murano Glass a must?